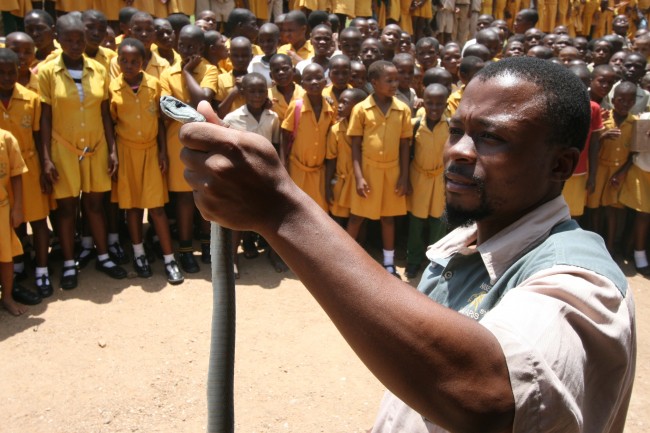 The Black Mamba is well known as Africa’s deadliest snake. In the small country of Swaziland, it’s feared and revered for its power. Between October and February, temperatures rise here and it’s known as ‘snake season’. At this time of year, black mambas turn up everywhere… in people’s homes, schools and cars. When people find snakes here, they kill them…but getting close enough to kill a mamba means it is close enough to kill you, and people are getting bitten here every week. In a country with very limited health care and no anti-venom, it is becoming a crisis.

Thea Litschka-Koen is a mum, and manages a hotel with her husband Clifton. Known affectionately as the white witch by the locals, Thea is determined to change attitudes towards venomous snakes, based on centuries of fear and superstition. She and her husband are on call 24 hours a day to rescue and release black mambas and other venomous snakes when they get ‘too close for comfort’.

But what the locals really want to know is – will they come back again? We follow Thea and her team as they set up a pioneering new scientific project to track black mambas in the wild. If she can find out more about their movements and daily lives, she will be able to pass on vital information and reassurance to the local people who have to live alongside them.